Deconstruction is a certain experience of the impossible
J. Derrida

To keep rigorously on the margins of painting and sculpture, while working its edges, is tantamount to strategically occupying a legacy in order to dis-orient it from within. This has been, since the outset, Antonio Catelani’s position, and his work can surely be placed among the most significant developments of the Italian art scene in the Eighties.
We could schematically trace the tenets of his enquiry in the expression of a double negation, 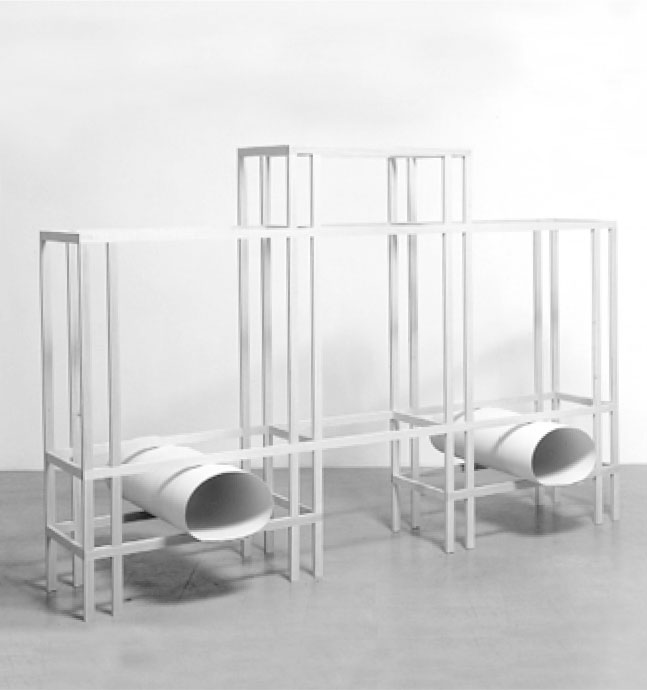 6. Tipologia, 1988 / 1991 and constitutive, centred around the formula neither… nor; a formula to be read with an emphasis on the original duplicity of the formative act, rather than its negativity (freed from its role of simple binary opposition); a neither this, nor that which, paradoxically, announces rather than preclude, or which, more precisely, promises through its very preclusion. According to Catelani there is only one way to imagine the beyond, what is on the other side (of the painting or sculpture): deconstructing, here and now, on this side, his own methodological practice to bring out its very limits. His work thus silently points out the Other it holds within itself laying claim to an atopic condition that induces the thought of what remains still unthought in the realm of the possible.
The apparently macroscopic distance between his latest works and his debut (a radi- cal lightening of materials, the introduction of the curved line and the fold, a gradual advance into painterly practices) does not signal a change in his pattern, but indica- tes, more simply, different means of articulating it. This becomes clear if, instead of highlighting the differences between the individual pieces and considering them as hypostasis, we take into account each series as a whole.
If we take a closer look at their inception and their development over time we will in fact see that, despite the unprecedented use of glass and the pictorial handling of color, the Pendant series shares many aspects with the Tortili (compositions of wooden cut-outs, neatly stacked to evoke hints of varying columns and plinths), which in turn hark back, despite the use of curved lines within each element, to elements perfectly integrated with the artist’s earliest creations. Note how the Tonsure integrate an empty space formally similar to that of the Pendant, and appear as their exact negative 1. The latter, which not by chance were contextual to the plants 2, allude from the outset to leaf shapes as well as to their organic growth, in their orderly distribution around the walls. Finally, through the forced passage of the pivotal work Architettonico e Pittoresco (scarcely known because exhibited in the artist’s home), they refer to the more recent and far more clean Lacunari 3 which in turn lead, not only conceptually, to the current Blinde Fenster 4.
An enquiry which does not expect a response, but a transformation of each statement into pure possibility: Antonio Catelani’s whole oeuvre presents itself as rigorous search for a form which questions the very idea of the finished work. Each procedure employed by the artist, thanks to its peculiarity of doubting, reflects its opposite, in an endless play of reflections and doubling that transforms indetermination into expressive autonomy.
The ephemeral nature of the links between one element and the other, within the body of his enquiry 5, finds perfect metalinguisitic expression in the use of metal clips or Velcro fastenings 6. Now, it’s no longer necessary for the pencil tracing to contra- dict the real outline of a sculpture in order to inscribe within it a possible alternative, or for a Tipologia to be placed horizontally rather than vertically on the floor, to show the interim nature of any reification of form. The possibility of change is now implicit in the very nature of the binding medium without which it would simply not exist. Since there is no supporting structure, any formalization of the work becomes decla- redly temporary, and the alternative or obverse of any possibility appear, so to speak, inscribed in its genetic makeup.
It is not by chance that some of the materials which gave birth to Concordia 7 had already been employed, albeit in a different arrangement, in the previous one-man show at the Akademie Schloss Solitude in Stuttgart, “Der Körper der Farbe” (The Body of Colour), and again later at Rome’s Twelfth Quadriennale.
The artist’s practice of re-using existing material is poetically suggested by a desire to give to the work of art a possibility of continually happening, without anchoring it to a sole and circumscribed event. In fact for Catelani, as for Agamben, creation is not a “process which goes from potentiality to act, to be exhausted in that aim, but contains in its core an act of decreation, in which that which has been and that which has not been are restored to their original unity” and in which “that which may not have been and has been fades” constantly “into that which may have been and has not” 8. Beyond creating a semantic indecisiveness, the artist’s recent works enact a structural indecisiveness: any signification is here resolutely jeopardized and may never materialize itself.
In constant strife with the boundaries of its own language, Catelani’s work appears to realize itself in the hiatus between desire and its accomplishment, thus its content is a semantic near-void, marking the space of an interval which is the origin of any possible meaning.
Animated by a double negation, halfway between painting and sculpture, the artist’s meditations on easels and on the body of color seem to reopen the exemplarity of neoplastic and suprematist compositions to uncertainty and indecisiveness, by uncovering the centrality of the moment of de-creation, inherent and consubstantial to that of creation.
The paper clip which materially bears the weight of the current compositions therefore represents a link which, in Derrida’s terms, within its stricture produces a contemporary effect of de-stricturation. This logic of double movement, an explicit theme of Catelani’s work, by virtue of its uncompromising indecisiveness suspends any binary opposition–in the sense of mere juxtaposition–and induces instead to think of the unthinkable of a link that keeps open a relationship of ab-solution. Creating a domain of maybe which repels any attempt of synthesis, Catelani’s works, like Duchamp’s door, 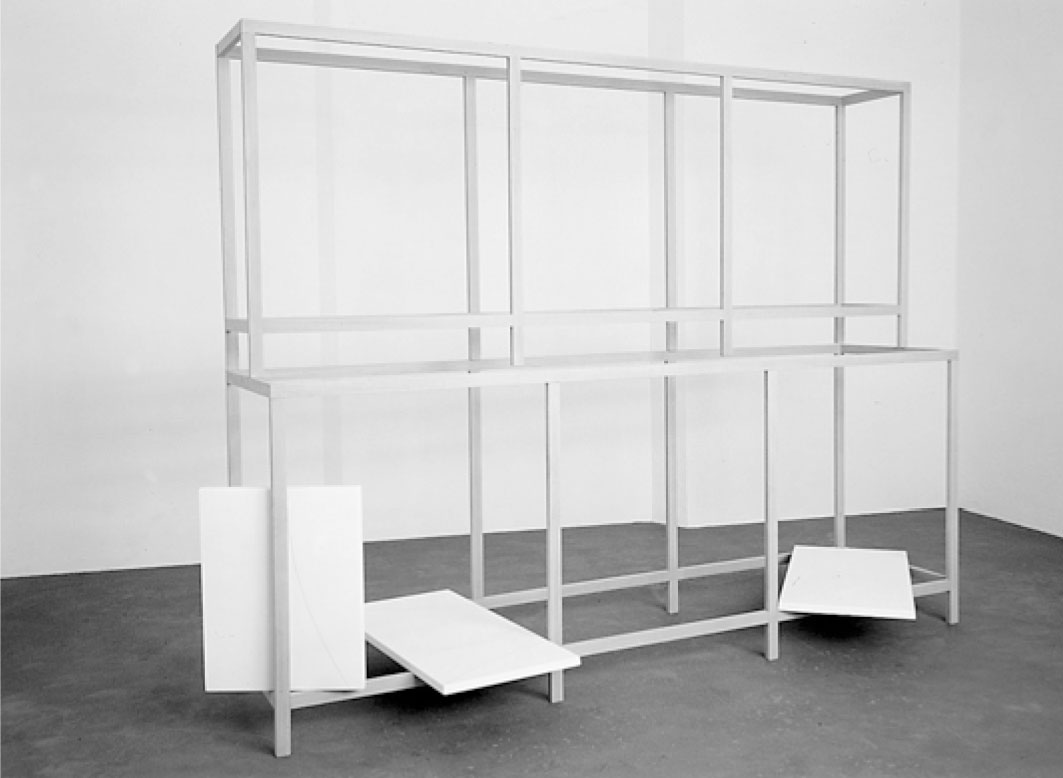 7. Tipologia, 1988 open by closing and close by opening or, better yet, suspend within them all notions of opening and closing, of here and beyond; inferring that which surrounds them, they materially inscribe in their form those caesuras that make them appear at the same time themselves and other, finite and in-finite.
What makes such work possible is, paradoxically, the very presence within it of the principle of impenetrability, which prevents self-sameness and simplicity. A seemingly insoluble impasse, turned inside out, is transformed into an opportunity which allows the work to free itself of purity. After all, this is the only chance for it to open up to a not completely predicted existence still to come, to the possibility of a potential which the realisation of the piece may reify but not exhaust entirely, preserving instead within it this potentiality as trace of what animates it and makes it exist.
Informed by difference down to their last joint, one could say that Antonio Catelani’s pieces weaken a priori their own assertive power, to reinforce the secretly disturbing indecisiveness of their being, as can be seen in the recent series Madreforma, which mimics abstract modernist paintings, while undermining any notion of the specifically pictorial.
The seemingly two-dimensional orderly geometries of the picture develop here into a more complex spatiality, disclosing the body of color through the materiality of layerings and caesuras which infringe upon the pictorial surface at the same time as they create it. Monochrome sheets of cardboard, on which the pigment has been 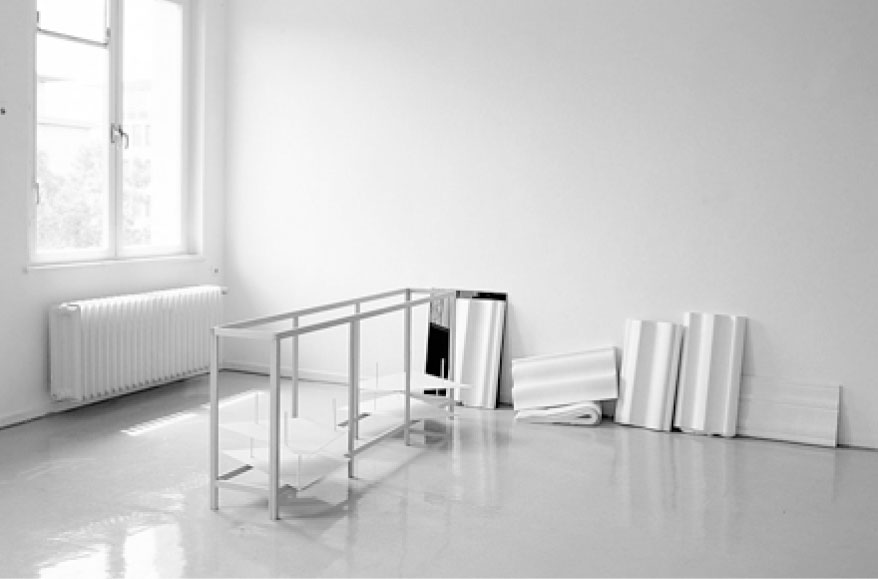 8. Tipologia, 1988; Pratica degli stili, 1990 – Kassel, Kunstverein masterfully built up with a palette knife, are pinned together with Velcro or firmly stratified and placed within a box/frame, following the artist’s rhythmic and chromatic alphabet, in a construction technique which seems to con-fuse painting and sculpture. What seems to be the structure of these pieces is, in fact, just the momentary crystallisation of a potentially infinite deferral: their form comes into being only insofar as it refers to a non-presence. Each element which appears on the stage, like a frame from an abstract film, bears the traces of a past element, and is permeable to its relationship with a future element.
The piece thus generates a still movement which institutionalizes the provisional fate of the materials of Concordia, at the very same time as it renders them potential––and in a way, superfluous.
Antonio Catelani’s recent trespass into the field of pictorial practice must be read not as a simple option, but as a remarkable operation of weakening the boundaries between different disciplines, and makes explicit the artist’s determination to think of the form and presence of his work along the lines of verbs rather than nouns, thus, in non-static terms, as potentiality rather than absoluteness.

This text is a modified and integrated version of the one accompanying the exhibition “Itinere 2” (Catelani, Spalletti, Taaffe, Toroni, Tuttle) at the Contemporary Art Center Palazzo delle Papesse in Siena, published in the magazine Numero Uno (1999).

(1) In Pendant, the pigment placed under glass plates had been mechanically spread by simple pressure and occupied the space entirely, while in Tonsure (small canvases painted by brush), the pigment drips along the borders to paint the boundary of an absence; it becomes parergon, it abdicates its own center, stepping 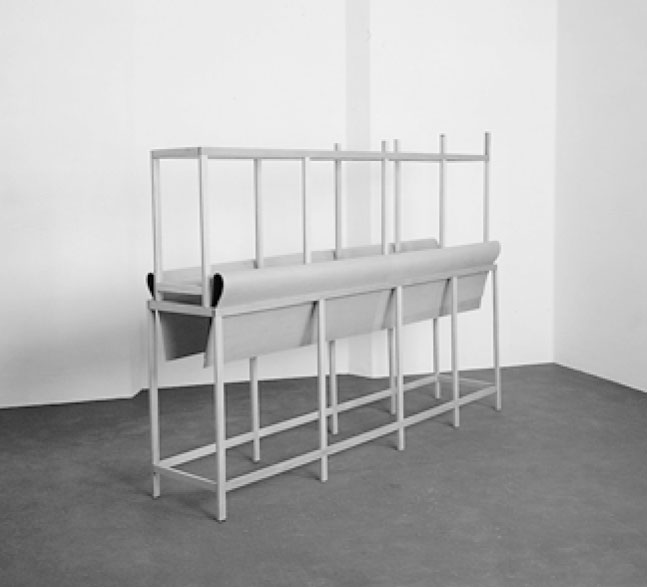 9. Tipologia, 1988back while creating the production of the product. Concening this issue, in the catalogue Compresenze Elio Grazioli quotes the artist’s own words: “In the works on glass painting creates itself, in the canvases it steps back!”.
(2) In “Pendant”, one-man exhibition, Studio Guenzani, Milan, 1989.
(3) Presented in the one-man exhibition “Compresenze”, Studio Guenzani, Milan, 1992.
(4) Presented in the exhibition “Licht Raum… Schwarz” at the Künstlerhaus Palais Thurn und Taxis, Bregenz 1997.
(5) Indicated in very title of works such as: Smarrita la regola (“Having Lost the Rule” 1986), Opera incerta (“Uncertain Work” 1987), Pratica degli stili (“Practice of Styles” 1991), etc.
(6) “The clips––states the artist––substitute glue, joints, permanent bonds; they are similar to the thread basting a dress together. It is these metal elements that keep the image together: without them everything returns to being mere material” (Il formaggio e i vermi, catalogue of the exhibition, edited by M. Scotini and L. Vecere, Cortona, Palazzo Casali, 1996). A similar purpose is carried out by Velcro, that easily removable tape fastening holding together the painted cardboard of the first pieces of the Madreforma cycle.
(7) Presented in the exhibition “Antonio Catelani – Daniela De Lorenzo” at La Nuova Pesa Art Gallery, Rome 1996.
(8) G. Agamben, Stanze, Turin, 1993 (1st ed. 1977).